"Pain is inevitable, misery is optional." 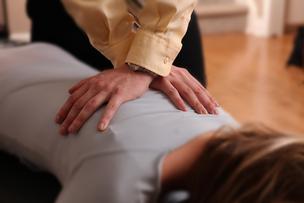 The most stunning statistic, however, is that the total number of deaths caused by conventional medicine is an astounding 783,936 per year!

That is a mind-boggling 2147 people killed daily!
That's 7 jumbo jet plane crashes, each and every day.
That's a 9-11 incident occurring every other day...FOREVER. God help us all.

Now, Lets Discuss the Safety of Cervical Adjusting
No one pays closer attention to injury statistics than Malpractice Insurance carriers. Scott Haldeman, MD, DC reviewed malpractice claims records for a 10-year period between 1988 and 1997. In reviewing the outcomes following the application of 134.5 million cervical manipulations (commonly referred to as the chiropractic adjustment), the records indicated that there were 23 reported cases of stroke or vertebral artery dissection (VAD).  Of this group, 10 of the patients had the complicating factors of high blood pressure, use of oral contraceptives, or a history of smoking, all of which are associated with vascular disease.  The actual incidence of stroke or VAD following cervical manipulation was found to be one per 5.85 million cervical adjustments. That means that the average chiropractor could work for 1430 years (or practice 48 full chiropractic careers!) before they might be involved with this type of litigation.

Another study published….
The estimated risk of major impairment following cervical spine manipulation is 6.39 per 10 million manipulations.  Manipulative treatment for neck pain is much safer than the use of NSAIDs, which are the most commonly prescribed medications for neck pain. Research in the United Kingdom has shown NSAIDs will cause 12,000 emergency admissions and 2,500 deaths per year.  The annual cost of GI tract complications in the US is estimated at $3.9 billion, with at least 2,600 deaths and up to 20,000 hospitalizations per year.

Patients with this condition may experience neck pain and headache that leads them to seek professional care—often at the office of a doctor of chiropractic or family physician—but that care is not the cause of the injury. The best evidence indicates that the incidence of artery injuries associated with high-velocity upper neck manipulation is extremely rare – about 1 case in 5.85 million manipulations.3

It is important for patients to understand the risks associated with some of the most common treatments for neck and back pain—prescription nonsteroidal anti-inflammatory drugs (NSAIDS)—as these options may carry risks significantly greater than those of manipulation. According to a study from the American Journal of Gastroenterology, approximately one-third of all hospitalizations and deaths related to gastrointestinal bleeding can be attributed to the use of aspirin or NSAID painkillers like ibuprofen.4

- Carey P. A report on the occurrence of cerebral vascular accidents in chiropractic practice. J Can Chiropract Assoc 1993;37:104-6.